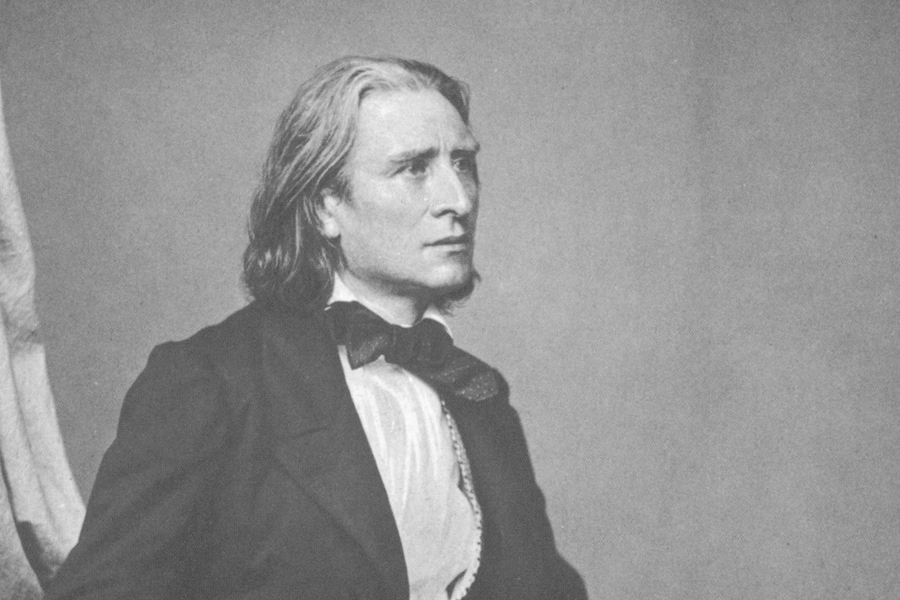 An unusual late work of Liszt; First, in terms of technique, as it’s quite easy  compared to other piano compositions of his. And second, in terms of harmony, as he seems to care in this composition about the harmonic content and its emotional effect, as he avoids the sense of stability found in conventional classical harmony.
The music starts with a motif of six notes, and this motif can be divided into two sets of three notes, as the first three move up and the other three move down.
The direction is not the only contrast, as we notice the first three notes are a forth and then an augmented fourth ending with c# that leads and resolves to the d, after which a simple g minor triad is placed. Which created a feeling of a quasi dominant tonic relationship.
The choice of the notes is based on the build up of gradually larger intervals up, as we see a perfect 4th then an aug-4th. And in the fifth bar, a b flat enters in the first beat filling the rest that was in the first four bars. This b flat clearly completes the pattern of the intervals. So now we have: b flat – d – g – c# which are as intervals: Major 3rd – perfect 4th – augmented 4th.

9th bar: A new session begins and lasts for 12 bars and consists of one idea.
The tremolo element is kept from the first session in the left hand, however, switching back and forth between b flat and a,  and that’s in order to fill the rest of the right hand every other bar with a new refreshing pitch ”a”. In the right hand: a session of chords begins: The first chord is f# – b – e flat, which sounds like an e flat minor chord, however, the notation with f# generates two unstable intervals, the aug 5th between bass and tenor, and diminished 4th between tenor and alto, and a diminished 7th between tenor and soprano; this theoretical complication is only to assure the instability of the chord and to avoid the interpretation of it as a minor triad.
Nevertheless, from this chord, all upcoming chords are derived through chromatic movement, as we notice the notes of the chord move down half step down throughout this 12 bar process. A series of augmented chords is generated through this chromatic process.

Bars 17 to 20: The very first motive moves to the left hand to function as an accompaniment, leaving the space for the right hand to enter with a new melody consisting of 5 notes.
Bars 21 to 24: the 5 notes melody is tonally imitated a fourth up with the same accompaniment in the left hand.

Bars 25 to 37: quasi a coda session that contains fragments from the piece.
The left hand: is the accompaniment that consists of two-part:
1. The half notes in the bass that replaces the tremolo from bar 9 to 13.
2. The chordal sequence that develops chromatically.
The right-hand moves in octaves in chromatic steps up from f# to f# an octave higher throughout this session.

The ending chords: quite an ambiguous sound, however, we see the f# finally leading to g. Other than that I have no idea how he chose those notes! But this uncertainty suits the work and makes an extraordinary ending.

What do you think?

More From: In English

Back to Top
Close

This website uses cookies to improve your experience while you navigate through the website. Out of these, the cookies that are categorized as necessary are stored on your browser as they are essential for the working of basic functionalities of the website. We also use third-party cookies that help us analyze and understand how you use this website. These cookies will be stored in your browser only with your consent. You also have the option to opt-out of these cookies. But opting out of some of these cookies may affect your browsing experience.
Necessary Always Enabled

Any cookies that may not be particularly necessary for the website to function and is used specifically to collect user personal data via analytics, ads, other embedded contents are termed as non-necessary cookies. It is mandatory to procure user consent prior to running these cookies on your website.

Your password reset link appears to be invalid or expired.

To use social login you have to agree with the storage and handling of your data by this website.