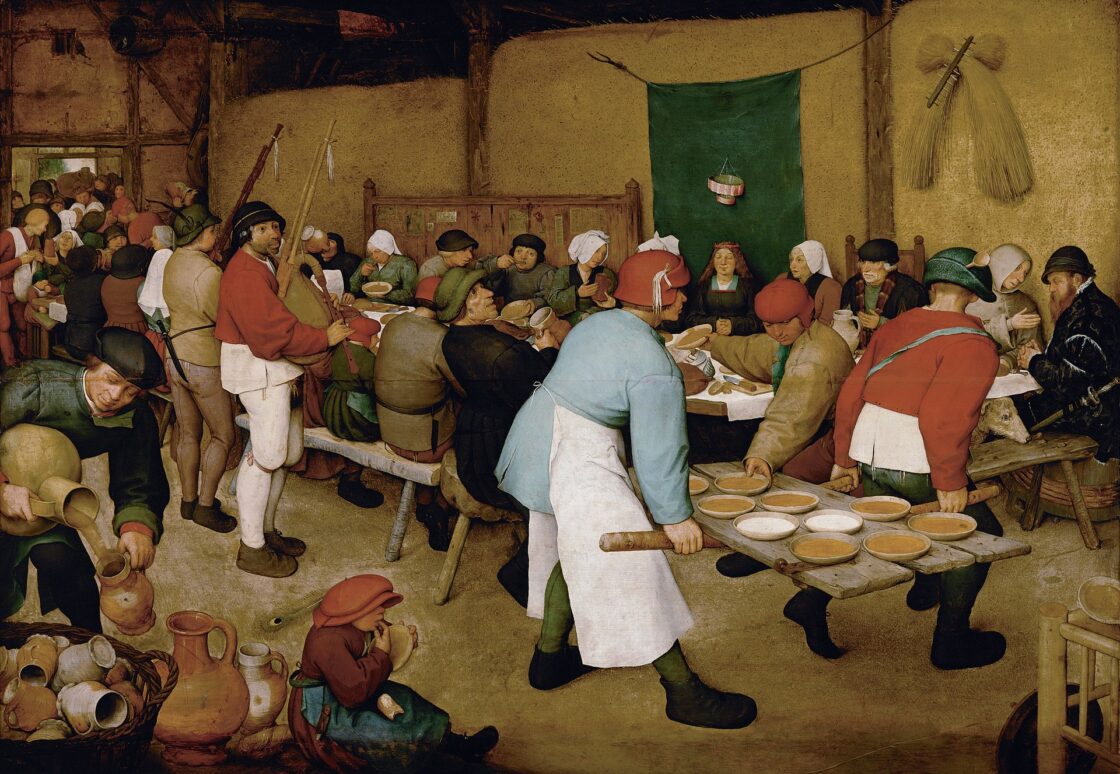 The Peasant Wedding is a painting by Pieter Bruegel the Elder, a Dutch painter from the Renaissance. In many paintings of his, he depicted the life of peasants from a close and truthful perspective as he showed the aspects of life that are not usually painting subjects, yet, with his intellect, he was able to implement symbolic meanings and moral aspects. In fact, he was even called “Peasant Bruegel”.

The main scene of this particular painting is a wedding and we can clearly see the bride in front of the hanging green textile which puts her in a place with much higher contrast with the background than the rest of the characters, and we notice that the bride is the only character facing the observer of the painting. _well, maybe except the guy on her right busy eating, seems to be the groom haha_. The bride seems passive and not engaged with the activities as everybody else. Sitting to her left, elderly man and woman who appear to be her parents, giving their position in the scene, their age and the fact that they are less involved in the activities like the bride.

We notice that the density is less on the right and rises as we go left. Reaching what appears to be the entrance of the barn, a lot of people are gathered trying to watch the wedding, or maybe trying to sneak in.

The scene takes place in a barn at summertime. We see two sheaves of grain with a rake, which indicates that it is the time of harvest. We see the plates being carried on a wooden board with hinges attached, what seems like an uninstalled door. The food they are carrying looks basic and simple, as we do not see a variety of shapes or colors. A man on the front right is pouring reddish liquid that appears to be wine.

The main food is bread porridge and soup. And in the very front we see a little boy licking his plate, which might indicate poorness, or maybe the food was just too good!. Contrasting this little boy, we see what appears to be a wealthy man or maybe a government man, judging by his clothing and fancy sword, we see him putting bread for his dog on the bench which might indicate that he wouldn’t eat this peasant food, _or maybe he just loves dogs_. On the left, across the table, we see two men entertaining the guests by playing pipe instruments (the Pijpzak). The furniture is modest and made of unprocessed wood as we see poor carpentry reflected in the curvature on furniture pieces and it’s just simple wood with no cushions or fillings.

The musician in red jacket and the man right to him in black jacket and green hat seem to be looking right at the same thing, which indicates there is more to the scene than appears in the frame itself and gives the feeling of more space and more activity happening despite that it is not painted down, which is impressive.

What do you think?

Back to Top
Close

This website uses cookies to improve your experience while you navigate through the website. Out of these, the cookies that are categorized as necessary are stored on your browser as they are essential for the working of basic functionalities of the website. We also use third-party cookies that help us analyze and understand how you use this website. These cookies will be stored in your browser only with your consent. You also have the option to opt-out of these cookies. But opting out of some of these cookies may affect your browsing experience.
Necessary Always Enabled

Any cookies that may not be particularly necessary for the website to function and is used specifically to collect user personal data via analytics, ads, other embedded contents are termed as non-necessary cookies. It is mandatory to procure user consent prior to running these cookies on your website.

Your password reset link appears to be invalid or expired.

To use social login you have to agree with the storage and handling of your data by this website.